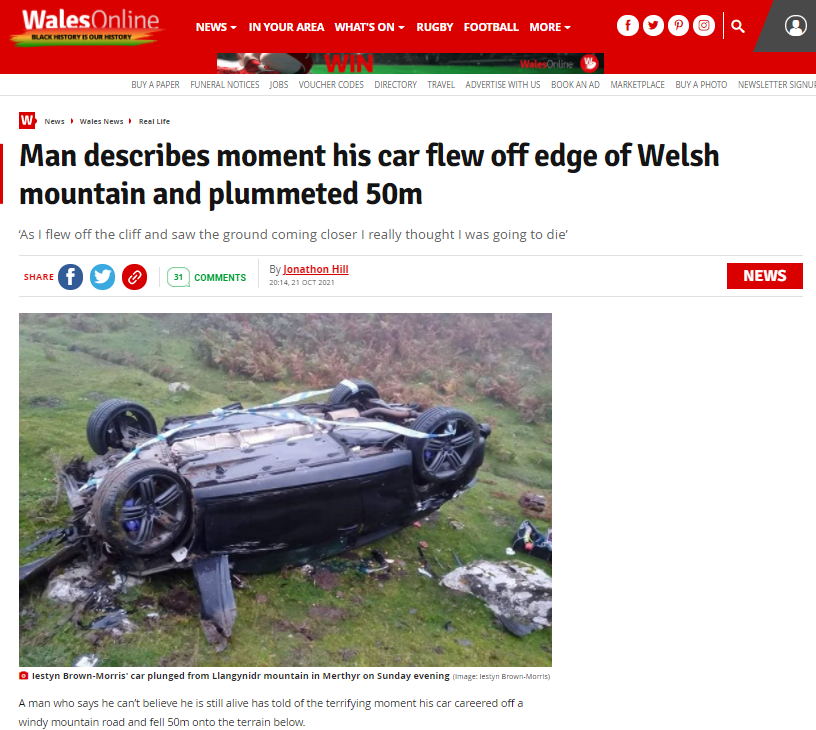 This past Sunday after getting off work, Iestyn Brown-Morris decided to drive through the mountains 20 minutes from his home in Abergavenny, Wales to watch the sunset. Driving through the mountains is one of his favorite, regular pastimes. While making his way on the very windy mountain road after the sun went down, an unexpected turn of events happened.

Iestyn says it felt like his vehicle hit a big dip in the road and something hit the left side of his vehicle. The next thing he knew, he lost control of his car and went flying off the edge of the cliff. As the car flipped and tumbled, he saw the ground approaching quickly below him and thought for sure he would die. When his vehicle finally came to a stop, it was crushed and upside down, but he managed to open his door and crawl out.

It just so happens that a group of boys and girls were on the mountain at that time and saw him crash. They pulled him up the mountain and waited with him until first responders (who were shocked that he was alive) came to whisk him away to the hospital. Iestyn was in the hospital undergoing tests for six hours before being released. He was banged up, bruised, and had lots of soreness, but he didn’t suffer any fractures or major injuries. Although he attributes his survival to his seatbelt, those of us who are aware how the Lord works know that Iestyn only survived because God decided to step in and work a miracle on his behalf.

The LORD is merciful and gracious, slow to anger, and plenteous in mercy. Psalm 103:8

5 Gracious is the Lord, and righteous; yea, our God is merciful. 6 The Lord preserveth the simple: I was brought low, and he helped me. Psalm 116

To find out more about Iestyn’s ordeal, click on the image below.