With all the devastation happening with the bushfires in Australia, my prayers go out to the people there. Yet in the midst of my concerns for all they’re suffering there, I have to wonder–what is or has contributed to all the devastation? I’ve noticed that talking heads on the news have been following the advice of Rahm Emanuel, the former Obama administration official and former mayor of Chicago, who said, “Never let a serious crisis go to waste.” It’s the liberal or globalist idea that when a crisis hits, you use it as an opportunity to inject a “progressive” policy or principle that people otherwise may not be open to.

In an effort to take advantage of this serious crisis, the talking heads are churning up the notion the Australian bushfires are caused by man-made climate change. It’s a push to get more of their socialism-based “green” initiatives thrust on the masses. Upon further review, critical thinking, and generally questioning whatever the media says (since they’re not really worth trusting), the true picture of what is going on arises. And it has nothing whatsoever to do with climate change. Most of the bushfires have now been attributed to either arsonists or those who set the fires accidentally. Nearly 200 of them are now facing criminal investigations and/or criminal charges.

The other culprits are climate change activists themselves and their political allies, as pointed out by columnist Miranda Devine who has been sounding the alarm for many years about the dangerous policies implemented by environmental activists in Australia. Her sentiments have been echoed by columnist James Delingpole. Both of them point out that these Marxist activists have gotten Australia to outlaw “controlled burns” that used to be customary in Australia. These controlled burns were done by property owners to rid lands of dead plants (grasses, bushes, etc.) with the use of small, controlled fires in order to wipe out any potential fuel for bushfires. Environmental activists claimed they were trying to save the lives of animals and preserving the environment, but it turned out to be a lie that has done just the opposite. 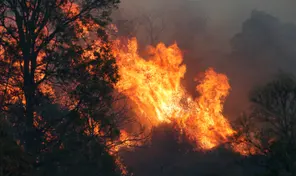 Australians have tended to fall for such lies and many more as their society has become more and more secularized, turning away from the Lord, as Australian Ken Ham of Answers in Genesis has noted several times. As a result of the ever-encroaching secular mindset, callousness toward truth and rejecting love for one’s neighbor have crept in. Eventually that mindset led to politicians who wanted the favor of environmentalists for personal gain and arsonists with an appetite for destruction. Add to that tinder box an ongoing drought, and you have the perfect recipe for disaster that Australians really did bring onto themselves.

In the book of Lamentations, the prophet Jeremiah lived in a similar secular society. The people of Judah turned their backs on God, implemented godless customs and laws based on lies, and spawned a generation that hardened their hearts against God and against anything resembling God, including their neighbors who were created in God’s image. So they contributed to their own downfall as well as opened themselves up to God’s judgment. Then they had the audacity to complain about the consequences they brought upon themselves. In the midst of Judah’s serious crisis of having Jerusalem destroyed, Jeremiah gave them some godly advice that Australia, or any other society in a crisis, can learn from today:

39 Wherefore doth a living man complain, a man for the punishment of his sins?

40 Let us search and try our ways, and turn again to the Lord.

41 Let us lift up our heart with our hands unto God in the heavens. Lamentations 3