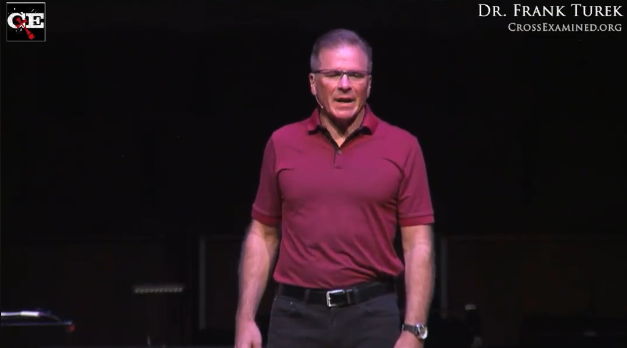 In the Facebook video above, Christian apologist Frank Turek answers the question that highlights the fact God gave free will to angels before he created humans. Another subject that came up in his answer was the fact that God does not redeem angels–the redemption plan was only for mankind. Although Turek doesn’t go into why that is, the answer is implied in scripture by comparing scripture with scripture.

All of mankind on every continent going all the way back to the beginning came from one blood, as Paul confirmed in Acts 17:26. All humans of every ethnicity and every skin shade on every continent and island can be traced all the way back to one man and one woman. Science has now caught up with this truth with its rather recent discovery of all humans descending from one man and one woman who are denoted as “Mitochondrial Adam” and “Mitochondrial Eve.” Since all humans ultimately come from one line, that made it possible for Christ to come from heaven as a human entering that one bloodline to reverse the evil actions of the one man who brought sin into mankind and the world. So Paul explains in Romans 5:

12 Wherefore, as by one man sin entered into the world, and death by sin; and so death passed upon all men, for that all have sinned: …

19 For as by one man’s disobedience many were made sinners, so by the obedience of one shall many be made righteous.

That’s also why the Lord Jesus Christ had to only die once for all of us, as Hebrews 10:10 tells us. Hebrews 9:23-28 also tells us that Christ’s sacrifice was superior to and more effective than the sacrifices required under God’s Mosaic law because they were mere cursory facsimiles or patterns of heavenly reality–the reality being that since all humans are appointed to die once, it was only necessary for Christ to die once. For him to be sacrificed over and over as was done in Mosaic law would have meant his sacrifice would be inferior to heaven’s reality.

Taking all of those basic principles into account, fallen angels are the real irredeemable deplorables because the angel-kind were not descended from one blood. They were all created individually and separately from each other. Furthermore, God had a different covenant with them than he has with mankind. This covenant with angels is implied in Jude 6 where we are told angels who keep not their first estate (of their own free will) can only face God’s judgment. Perhaps it’s also possible that God did not give angels a second chance but cut humans some slack with his covenant of redemption because humans did not have the greater advantage of dwelling in heaven, as the angels did, when they were created. This speaks to Christ’s teaching in Luke 12:48 that to whom much is given, much more shall be required.

There also may be other reasons I haven’t touched on. But whatever God’s reasons were, since he is the infallible, righteous, truth-filled sovereign Creator, it’s his prerogative to right any rules as he sees fit. I’m just thankful and forever grateful he decided to unleash a plan of redemption that didn’t leave me in my sinful, hell-bound state.