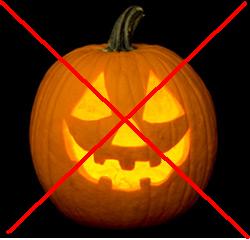 Samhain (pronounced sow-in or sah-ween, meaning “summer’s end”) began as a Celtic celebration of the harvest, the end of the old year and beginning of a new one, and a celebration of death many centuries ago.  The various rituals during the celebrations were led by the Druids who were the priest class of the Celts.  During this time of the year, all livestock were brought in from the summer pastures and crops were harvested in preparation for winter’s arrival when nights became longer.

Celts believed October 31–November 2 was the period when the world of the living and the dead were not separated.  It was believed the dead came back to walk the earth to either bless the living or wreak havoc in their lives, depending on what steps the living took to appease the dead.  Give the dead a treat and you would be blessed by them and they would return to their graves in peace, but if you provided no treats for them, they would play a mean trick on you like haunting your house indefinitely.  This is the origin of modern day trick or treating.

Displaying anything symbolizing death was encouraged this time of the year as a way of welcoming the dead.  The main god and goddess commemorated during this pagan festival were Bronach, the goddess of Samhain rituals, and Crom Cruaich, the god of harvest, death, and contact with the dead (necromancy).  When the Romans conquered the Celts, they added to some of the heathen rituals of Samhain.

However, after the Roman Empire became the “Holy Roman Empire,” those who converted to the pagan/Christian hybrid system felt uncomfortable about being surrounded by such blatant paganism, but the pressure from pagan family and friends to join in the celebrations was often too tempting for converts.  So to ease this peer pressure, Pope Gregory IV moved the celebration of All Saints Day to November 1–right in the middle of the Samhain celebrations.  October 31 then became known as All Hallows’ Eve, later shortened to Hallowe’en (the word “hallow” means “blessed” or “sacred”) and November 2 became All Souls’ Day.  October 31–November 2 was then renamed the season of Hallowmas with a Roman Catholic mass for each day.

This pope’s move did nothing but lead to pagan symbols being mixed with “Christian” symbols, just like all the other Roman Catholic holidays.  Here are more pagan beliefs and rituals celebrated during the Halloween season contrasted to the truth of God’s word:

There was a time when celebrating Halloween was considered harmless.  But with the resurgence of pagan philosophies and rituals in a postmodern world, Halloween can no longer be just dismissed as innocent fun.  Our society is being flooded with books, TV shows, and big-screen movies that portray the dark arts and vampirism as something to aspire to or that tell us such activity is normal or ordinary.  Just this week the government of the UK once again acknowledged the Druids as a valid religion.  The word hallow may be used for this season, but there is nothing hallowed about such celebrations.

Learn not the way of the heathen… For the customs of the people are vain …  Jeremiah 10:2, 3

Note: this post is derived from a post I did three years ago entitled “Of divinations and the damned: Halloween’s deceit.”  This is an updated and expanded version of that post.